Kitchen appliances, such as the Instant pot, make rendering fat a super quick process. Follow along to learn why you would render Lard and the quickest way to do it!

Stocking up and buying meat in bulk has SO many benefits. One of those benefits include, having the option to keep your fat for rendering. Having homemade Lard or Tallow on hand for cooking is so delicious and has some great health benefits. To top it all off, the process of rendering Lard or Tallow only takes one hour, if you have a meat grinder and Instant Pot!

How to get your hands on some pastured pig fat

We just picked up a whole pastured hog that we bought from a local farm. I had never rendered any kind of fat prior to this. After doing research, I learned that the process is SO simple and that I have the equipment to do so.

If you have the land, it is a great idea to raise your own animals for meat. This way, you can be in control of how the animal is raised and have the satisfaction of raising your own food to put on the table. If you do not have the space to do so, finding some local farms in your area to buy an animal in bulk, hanging, is the key. You will be given the option to save offal, bones, and fat this way to better utilize the whole animal and reap the benefits.

The time it takes to render lard

Finding time to do homesteading tasks, such as rendering fat, can be challenging when you are already busy. Luckily, this is a great activity for the whole family to be involved in. My toddler was able to be of some help by feeding the chopped up pig fat pieces into the food processor! I love that my kids are learning how to cook from scratch , while also learning some good ole’ homesteading skills.

The sad truth is that our culture is so directed to convenience that things like, rendering Lard, sewing, and, cooking from-scratch, are lost arts. Let’s get these life skills back on the radar, starting with this quick way to render fat with appliances you probably already have in your kitchen! It really is much more simple than it may seem and quicker than you would have ever imagined.

Pastured pigs can contain high levels of omega 3’s and 6’s, depending on their exact diet. These vitamins are a vital part of our health.

Lard is great for making homemade Tamales, which is probably the only thing you’ve ever heard it used for. I know I always associated Lard solely with making Tamales. Homemade Tamales is not the only use for Lard. We love to use Lard to make Sourdough Tortillas, fry potatoes, sauté seasonal veggies, and more!

Lard is shelf stable for several months. When properly rendered, use lard from your jar on the shelf for up to 4 months. You can also freeze lard in small quantities in a freezer-safe container to prolong the time storage time before use.

How to render Lard in the Instant Pot

Begin by placing your meat grinder attachment in the freezer for 30-min to an hour prior to use. This helps the grinder to cut smoothly and avoiding gumming up during use. Alternatively, you could partially freeze the pig fat ahead of time.

Chop the fat into small, narrow pieces. Place your instant pot below the grinder to and feed the pig fat through the grinder.

*Be sure not to over-fill your Instant Pot, stopping at the 2/3 full mark and no further.

Add 1/4-1/2 cup of filtered water to the Instant Pot. This is to avoid getting the “burn” error when you turn on your instant pot to render the fat.

Place the lid on the Instant Pot and be sure it is set to “sealing”. Choose the setting, high pressure and set for 1 hour.

*If you get the “burn” error, you may need to add another splash or two of filtered water.

After the fat is rendered in the Instant Pot for an hour, allow pressure to release.

Place a fine-mesh colander in a large bowl and pour the rendered Lard through. Discard the chunks that will be left in the strainer.

Pour the liquid you are left with into a jar and keep on the shelf for up to 4 months or in the freezer for up to 6. The Lard will thicken as it cools.

Leave a comment with your favorite ways to utilize Lard!

More encouragement from My Abiding Home:

Previous Post: « The Best Essential Oils for Pregnancy
Next Post: Powerful Prayers From A Mother To Her Toddler »

What a joy it is to have you here! 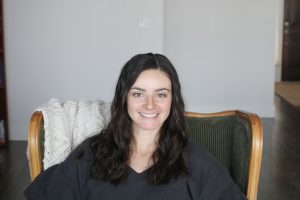 Hello, I’m Bre! My home is full of 3 hungry, rowdy boys. I’m passionate about being the heart of my home. Follow along to see how I keep up with all the crazy, all the while living for Christ. Read more about me here.