This simple Sourdough crust can be whipped up in minutes and is so versatile. Follow along for this gut-healthy recipe and our favorite ways to utilize it!

A friend of mine, recently, showed me a homemade pop tart recipe. I instantly was encouraged to get experimenting in the kitchen to create my own pop tart recipe. It was then that I realized that the main part of the pop tart is essentially a pie crust.

After several trials, which my family didn’t mind, I think I have created the perfect crust recipe. I’ve been using this crust recipe in everything lately like chicken pot pies, quiche bites, and pop tarts. The flavor of the tangy sourdough mixes so well with sweet and savory dishes.

Sourdough is created from a starter that has fed flour and water and feeds on a natural bacteria. This bacteria is naturally existing in the air and is how bread products were traditionally leavened. There are starter packets you can buy from companies such as, Cultures For Health, but I just opted for the simple, from scratch way when creating mine. Sourdough starter takes about a week to get fermented before it’s ready for use in your favorite recipes.

Cooking with Sourdough is a bit different than cooking with a yeast packet. Sourdough, in my opinion is much more simple. For example, some of our favorite recipes use just sourdough as the base. Things like pizza crust, crackers, and pancakes are made by literally just pouring the sourdough starter into the recipe without adding any flour or water. Once you get the hang of using a sourdough starter it really is ruthless, it’s hard to mess up.

Pretty much any recipe that utilizes grains can be converted to a Sourdough version. It will take some experimenting with replacing or adding to existing leavening ingredients with Sourdough starter. But, I can attest that it is always worth it to switch a recipe to Sourdough. Digestion is improved when you do so and the flavor profile of dishes is taken up a notch.

One thing to consider when using Sourdough to make things like, bread, is to account for the rise time. Most recipes are best started ahead of time and allowed to rise and ferment for several hours prior to use. This makes Sourdough products more easily digestible, especially for those that have an intolerance to gluten. If you have celiac disease, you still will not be able to enjoy Sourdough. You can, however, create a gluten-free Sourdough starter. I have not done that so I have no idea how it will turn out, I just know it can be done.

Einkorn is an ancient grain, like emmer or spelt. It has even been found in ancient tombs and was nearly extinct before it got re-discovered about 15 years ago. Einkorn has a different, more grainy texture and the flavor is slightly nutty. We have been experimenting with Einkorn flour a ton in our kitchen as of late and are loving the flavor it adds to our favorite recipes, such as these crescent rolls.

Cooking with Einkorn is a bit tough. There is definitely a learning curve to using Einkorn flour. Due to the makeup of Einkorn flour, it absorbs liquid more slowly than other grains. Be sure not to add extra Einkorn when you grow impatient with a recipe not mixing right. You want to avoid making the dough dense. Einkorn already produces a more dense product than other grain options.

As a general rule of thumb, you’ll want to use about 20% less liquid than a recipe originally calls for when you are replacing with Einkorn.. Once you give Einkorn a try, it will be worth the extra patience to get a handle on cooking with it. We almost exclusively use Einkorn flour in our kitchen now, due to it’s easy digestibility. For this recipe, I prefer using All Purpose Einkorn flour over Whole wheat Einkorn flour because of texture and flavor.

Supplies you will need

Whey is the nutritious, yellow liquid that is expelled during the straining process when making cheese. The Whey protein is created and separates from the cheese curds. It is rich is probiotics and amino acids. Save your whey and use it in baking recipes or smoothies!

How to make Sourdough Einkorn Crust

Chop butter into chunks. Add flour and butter to a food processor and pulse several times until the butter forms pea sized balls.

Alternatively, add the flour and butter to a medium bowl and work together with hands. The key here is to work quickly so you do not heat up the dough too much because then the crust won’t turn out as flakey.

Add remaining ingredients to the food processor and pulse until the dough starts to come together.

Freeze for later in a freezer-safe container or bake immediately.

Flour a work surface and roll out dough to 1/4 inch thickness. Cut out or shape dough as necessary for whatever recipe you are using the crust for.

*Optional: If using for a top crust, brush a beaten egg across the crust to help it brown nicely.

Bake for 20 minutes, or until the crust is golden brown.

Possible ways to use the crust

Leave a comment below with your favorite ways to utilize crust, I’d love to hear! 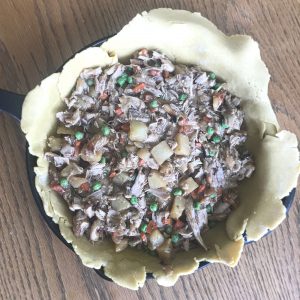 Keyword Crust, Dessert, Einkorn, Sourdough
Previous Post: « How To Make Cream Cheese with Raw Milk
Next Post: What Qualities To Search For In A Biblical Mentor »

What a joy it is to have you here!

Hello, I’m Bre! My home is full of 3 hungry, rowdy boys. I’m passionate about being the heart of my home. Follow along to see how I keep up with all the crazy, all the while living for Christ. Read more about me here.